‘A Modern Twist’ Pays Off 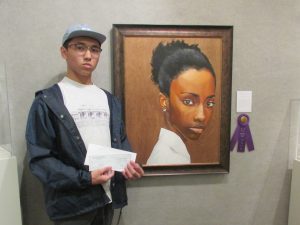 Johannes Vermeer’s 17th century oil on canvas, Girl With a Pearl Earring, shows the left side of a Caucasian girl’s face, wearing one pearl earring.

Hunter looks for imperfections in faces. Then he captures them on canvas and voila – his work wins awards, such as the Best in Show at the Franklin G. Burroughs – Simeon B. Chapin Art Museum’s Horry-Georgetown County High Schools 18th Annual Juried Art Exhibition.

Hunter is about to graduate form the Academy for the Art, Science and Technology, leaving behind the epitome of a young artist in the making.

“This year, he matured into the artist he has become,” says art teacher Jamie Franklin. “In his junior year, he was working with different mediums and trying to find his style. This year, he has flourished with oil doing portraiture.”

“Junior year,” Franklin explains, “is a buffet with they try everything, and then senior year they focus on their style.”

Hunter’s style right now is precise – most of his works are portraits of African Americans.

The 18 year old explains, “In the original painting, its a giant pearl but one pearl was boring. Jewelry is different now. She has a double piercing in the ear that shows. I definitely wanted to change it up and show something from our period of history. I wanted to capture this time period and what is beautiful to me.”

What is beautiful to him, Hunter says, are the imperfections in people’s features.

“I like to paint people with interesting features who haven’t been painted before. I don’t want straight noses. I want something new in a face.”

One of Hunter’s larger pieces is a portrait of Brazilian model Ana Flavia. He liked her story, and tells that she was working retail in a small when she was approached to model. She had to borrow a pair of high heels form a friend for the audition and now she’s a supermodel.

“She has an Afro and her face isn’t symmetrical,” he says, explaining what’s interesting to him about painting her.

When it comes to the lack of symmetry, Hunter is an expert. One side of his hair is close-cut black and the other is longish wavy blonde.

“Originally, it was silver blue,” Hunter says. “I wanted something that wasn’t traditional.”

Hunter and his father, also named Timothy Hunter, his mother Maria Baens, and his younger siblings Paul and Isabella, live in Briarcliffe.

Along with his parents, his Aunt Rita, he credits his teachers, Jamie Franklin and Rick Spivey, and even his art classroom for his talent.

“This room is the reason I’m as good as I am,” he says about the art studio at the Academy for the Arts, Science and Technology.

“My classmates are amazing. I’m glad I could grow with them because a lot of my growth has been because of them. When they grow, I want to catch up with them, and that keeps me painting better and better.”

Hunter was raised to appreciate art, and was taken to art museums wherever the family vacationed.

He’s always drawn, using pencils, pens and markers until his Aunt Rita gave him a set of oil paints for Christmas his sophomore year. Even then, they sat on a shelf for months until an art project at school inspired him to use them.

“It clicked and I felt like I understood oils very well,” he says.

“He’s found a niche and he has the potential for that to be just the beginning for him,” Franklin says.

What he wants for himself is to live in New York City, making a living as an artist.

But, just in case…when he studies at the College of Charleston, he will double major in chemistry and fine art.

“If I can’t make it as an artist, I can use the chemistry degree for a science career. But my dream,” he smiles, “is to be an artist. I want to capture the soul of a person. I don’t want to learn to paint a lip or a nose and memorize that.”

He says he doesn’t go out of his way to select a model with imperfections, but says, “But if I can make their crooked nose look beautiful…”

“Hunter doesn’t have a lot to say. He’s an observer. He takes things in before he reacts.”

When he’s not painting, Hunter surfs, and when he’s not doing either of those things, he’s photographing abandoned buildings.

Hunter looks forward to furthering his education saying, ” I hope college will help me because I’m limited in my lack of knowledge. I want to be able to paint what’s in my head.”

Does he think Vermeer would approve of his Girl with Two Pearl Earrings?

“I would love for him to say he likes my stuff,” Hunter says. “He was one of the masters. I hope he would have liked what I’ve done.”