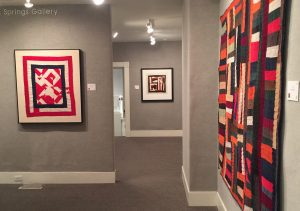 In the isolated African-American hamlet of Gee’s Bend, AL, located along the Alabama River, women made quilts to keep themselves and their children warm in often unheated houses that lacked running water, telephones and electricity – from the post-Civil war era well into the 20th century. Along the way they developed a distinctive style, noted for its lively improvisations and geometric simplicity. These quilts, which came to the notice of the art world in the 1990s, are considered to be one of the most important African-American visual and cultural contributions to the history of art within the United States.

The 2010 The Quilts of Gee’s Bend exhibition, presented by the Franklin G. Burroughs-Simeon B. Chapin Art Museum, remains one of the Museum’s most popular and talked-about exhibitions, according to Museum director Patricia Goodwin. A new exhibition, Gee’s Bend: From Quilts to Prints, examines the work of four well-known Gee’s Bend quiltmakers and their recent exploration into the art of printmaking. The exhibit runs from December 8, 2016 through April 23, 2017; additional public programs to accompany the exhibit are planned for spring 2017.

“Having the occasion to bring the quilts back to the Art Museum while simultaneously opening up a new conversation about the translation of ideas between one artistic medium to another was an opportunity we didn’t want to miss,” said Goodwin.

The exhibit, which traces the artists’ process of translating their ideas from fabric into print, includes 17 quilts, 15 etchings and six maquettes, small-scale quilt replicas used as templates for the layout and color selection for each print.

The maquettes would be pressed onto a copper plate coated with soft-ground, a material made of a combination of wax and tar on which the design, fabric textures and even the quilters’ stitches would create an impression, which would then be used for printing. Although created with the standard quiltmaking technique of piecing, the maquettes were made by the artists to be used as a tool for the printmaking process.

The scale of the finished prints, much smaller than the quilts on which they are based, is in line with other fine art works on paper. Displayed with a white matte and framed behind glass, these images convey the idea that they are works of art and not simply crafts, as many viewers perceive quilts to be.

Each print references the workmanship of the original quilt, as elements of color, line and texture in the fabric have been simplified and flattened to a two-dimensional form. At the same time, the art form of the quiltmaker’s design loses its cultural associations with textiles and its identification as something domestic, female and craft.

The translation from quilt to the fine art print medium also offered the makers the opportunity to create poetic or evocative titles for their works. Gee’s Bend quilts were generally not titled beyond a descriptive word or phrase identifying the design.

The prints offered the additional benefit of continuing a tradition of art-making in the Gee’s Bend community that, prior to the quilts’ rise to fame, many feared was in danger of being lost, either from quilts’ falling out of favor, or from a lack of interest in quiltmaking among the younger generation.

While Gee’s Bend quilts have been exhibited in such prestigious institutions as the Museum of Fine Arts Houston, the Philadelphia Museum of Art, and the Whitney Museum of American Art (NYC),translating the women’s textile work into the print medium opened up new avenues for their creativity.

For example, as a result of the four quilters’ collaboration with Paulson Bott Press to produce etchings of their quilt designs, quilter Louisiana P. Bendolph was commissioned by the San Francisco International Airport in 2013 to translate her print New Generation (2007) into a large-scale ceramic tile mosaic to be displayed in Terminal 3 East.

Also, through a commission from the Foundation for Art and Preservation in Embassies (FAPE) and its Lee Kimche McGrath Original Print Collection, quilter Loretta Bennett’s Yellow Jack (2006) was selected for the collection, which is stored in Washington, DC, and made available to US ambassadors when they are choosing art objects with which to decorate their embassies.