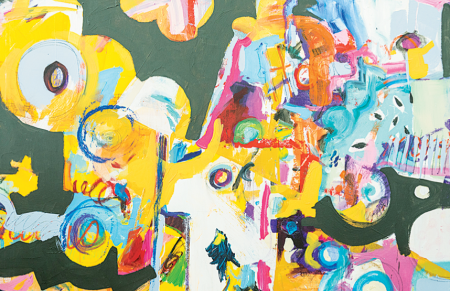 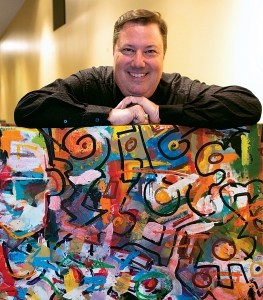 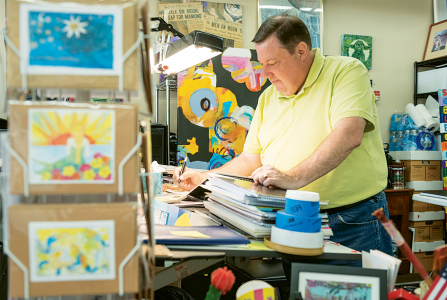 Watch out, tourist attractions and outlet malls; Billy Miller has arrived, and he aims to bring a shot of adrenaline to the Myrtle Beach arts scene.

With a personal mantra of PACE, or “Positive Attitudes Change Everything,” Miller creates much more than art. In addition to his award-winning abstract works in paint, drawing and digital media, Miller creates opportunity. He employed his innovative artistic talents to create success first in his personal career, then in the Houston area where he opened his own studio, and now here in Myrtle Beach. Together with local established artists, Miller senses a change coming to the area’s artistic landscape, and he’s set to be a primary catalyst.

“I’m always surprised that people don’t realize what a vibrant art community is here,” Miller says, “that we have a world-class art museum here, that there are people that really want to make art happen here.”

The William H. Miller studio on Main Street in Myrtle Beach is a welcoming haven that not only offers the sensory delights of a working studio, but aims to be a prototype for a revitalized downtown arts district. The stretched canvas that covers one wall is an abstract painting in progress, its vibrant colors brimming with promise and potential interpretation. Paintings, digital media, glass works, photography and greeting cards share the artists’ space with easels, shelves of paints and brushes and an industrial digital printer, while classical music drifts from speakers in the background. This place feels like art, and Miller is expanding its impact by building ties with other artists and establishing unique programs to draw patron support and energy.

Miller has spent 18 prolific months living in the area. In addition to opening his studio in January 2015, he has been voted onto the Board of Trustees at the Franklin G. Burroughs-Simeon B. Chapin Art Museum and selected as a featured artist for the Collector’s Café 2016 Spring Art Show. He’s also participated in Lake City’s prestigious Art Fields competition and, in conjunction with local artists Sybil Alfano and Ernesto Hernandez, hosted the Art Happens exhibit at his studio and begun a Facebook group called Art Escape Creative Arts Group. This group has drawn 180 area artists to exchange news and information.

Patricia Goodwin, executive director of the art museum, recalls the first time she met Miller: “It was obvious that Billy not only had passion for his craft but also a talent for promotion and a vision for community. He is truly an advocate for the arts and artists.”

Digital media and the corporate world figure prominently in Miller’s background. With career experience in computer graphics and Internet marketing through positions with AT&T and Direct Energy, Miller worked his way from New York City to Dallas to Houston, honing his twin skills in the business world and digital forms of art, while also painting and drawing on the side. However, the call of personal creativity became more urgent, and in 2006 Miller vowed “never to allow a corporate job to stop me from doing my art.” By 2012, he was ready to pursue a full-time career as an artist, finally following a recurring dream that told him to “go be the artist you’ve always wanted to be.”

Miller’s recent painting Leap of Faith, his feature work at Art Fields, is designed to depict that very sensation: of moving into the unknown, and of believing in equal parts self-reliance and serendipity to achieve a lofty goal. However, viewers’ interpretations of the painting span a wide range, and this, Miller says, is the whole point of the genre. “I like abstract because it doesn’t matter what my intention is,” he explains. “What matters is that you as the viewer feel something. You experience something, whether I put it there or not.”

Miller opened his first studio in Houston’s Washington Avenue Arts District in 2007, and he was instrumental in garnering support to build the area. The district expanded from Miller’s single warehouse in 2007 to five warehouses housing 400 artists in 2014. Houston Mayor Annise Parker declared June 30, 2014, William H. Miller Day to recognize his artistic contributions. “I wouldn’t be the artist I am today without the experience and collaboration of such talented artists that I worked alongside in Houston,” Miller says.

Miller has already begun applying his organizational talents locally by offering classes in his studio and organizing the Main Street 10, a consortium of local artists that share his studio space.

“It is my hope,” he says, “that I can bring this same camaraderie to the Grand Strand by working with the local artists to showcase the talent and make the area a vibrant space for the arts.”